Philippos A. Philippides was a Greek weapons inventor of the very early 20th century.
Philippides was born in 1884 and by the time he was 21 yars old, developed a rifle based on an earlier model of the Austrian manufacturer Mannlicher.
The bolt consisted of 7 parts (compared to the 10 pieces that formed the Mauser and 11 for the Manlincher) with a simpler and reliable loading and feeding mechanism.
The Greek Army had chosen the Mannlicher-Schönauer design, instead of the Greek-designed "Philippides gun" ('Οπλον Φιλιππίδου), after intense lobbying against the Greek design in 1905. This caused a serious political crisis, with accusations about "national treason" were heard in the Greek Parliament. The Philippides gun was officially approved for the 1925 order, but, again, the Mannlicher–Schönauer was produced (by Breda in Italy), due to (reportedly) late submission of the Greek designs to the Italian manufacturer and/or… cost factors. 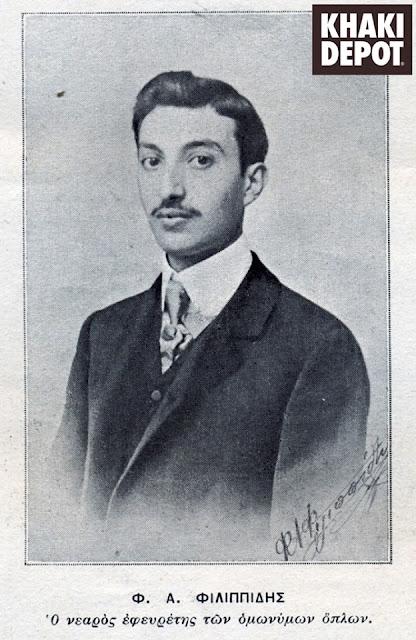 The photocaption reads:"Ph. A. Philippides. The young inventor of the homonymous weapon"

Section along the axis of the barrel. Arrangement of the cartridges and the clip for 6 cartridges. 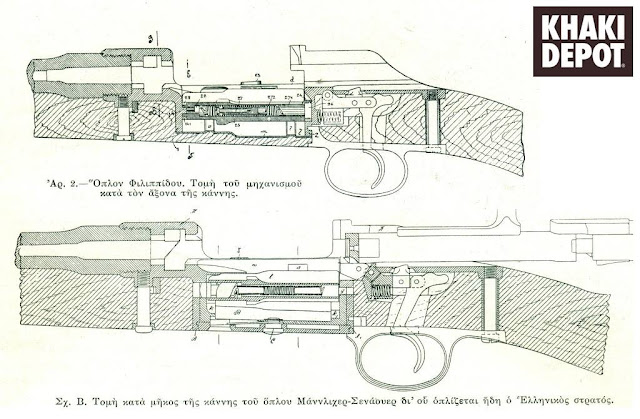 Khaki Depot
Khaki Depot, produces an exclusive range of Greek military uniforms and accounterments replicas for military museums, heritage museums and the discerning collector and reanactor. Our products are manufactured as exact replicas for museum exhibits, or custom-made to order for reanactments. Khaki Depot, upon request, provides the relevant historical research material of any historical period, expert identification and consulting of original objects for museums collections as well as for the film industry.